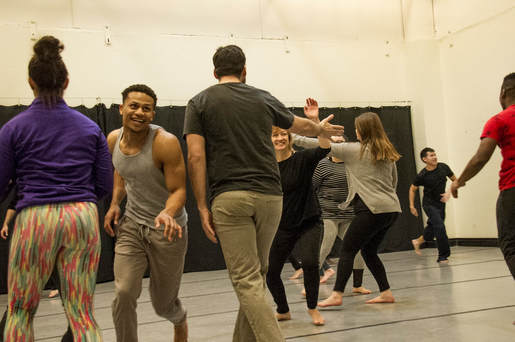 I believe in….
Training student actors who know how to make unique choices derived from their own impulses.  In acting classes, I work to invest in and drawn out their actor instincts, facilitating the process as they shape their own work.  I seek to notice their slightest impulse and capitalize on it, guiding them as they find their own path for uncovering a role, using the various acting techniques we have learned. I want to nurture confidence in their sense of personal artistry. I believe that by providing my students with a solid foundation of text work, acting technique, research, and awakening their imagination, their choices inherently become more refined, organic, and uniquely theirs.

My trademark is…
Cultivating student artists who are confident, inspired, and empowered to make theatre.  Artists who pursue professional acting work arrive at auditions and rehearsal able to articulate and inject their own ideas into the collaborative process. Artists who stand out because they are not waiting for a director to tell them what to do. Artists who go out into the world knowing who they are and what they want to bring to the world – they are comfortable thinking and moving creatively in the theatre world.

I am committed to…
Being a team player who welcomes curiosity and collaboration, and I believe that the classroom is the place to begin cultivating those creative muscles.  In my Acting 1 classes, we talk about how to work with scene partners in rehearsals outside of class.  We create Rehearsal Agreements, guidelines and goals for those rehearsals.  We talk about what it means to collaborate, to be an effective and supportive scene partner.  I build on this foundation moving into upper level acting classes as well.  My goal is that students leave my classes engaged not only in their own acting process, but in the processes and success of their partners and cast mates as well. My hope is that they recognize that a supportive partnership among cast members ultimately generates more powerful, inventive work.  That is the kind of artist, and human, that I want to welcome into our global theatre village.

I expect…
Excellence. Students who work at their fullest and highest capacity. Discipline. Curiosity. Risk-taking.


My nuts and bolts priorities in the classroom:

Kim Stauffer is a professional actor, director, educator, and member of Actors’ Equity Association.  As a full-time performance faculty member and Head of Acting at the University at Albany, she specializes in actor training that is based in Stanislavski and Meisner techniques. Other areas of expertise include movement for actors, auditioning, and business/networking for emerging artists entering the theatre industry. She received her MFA in Acting from the University of North-Carolina – Greensboro, is an Associate Artist at Chester Theatre in Chester, MA, and is a participant in Paper Lantern Theatre’s Theatre For Our Tomorrow , Winston-Salem NC.

Additionally, Stauffer has a special interest in social justice and applied theatre.  She served as director of Barrington Stage Company’s Playwright Mentoring Project which received the 2015 award for Creative Youth Development from the Massachusetts Cultural Council for the program’s work creating devised theatre with under-served youth and teens in the juvenile court system. At UAlbany, she directed the theatre program’s production of Water by the Spoonful  which was awarded a Diversity Transformation grant in 2016 from the Office of Diversity and Inclusion at UAlbany.  The production was used in partnership with local organizations such as the Addictions Care Center and Camino Nuevo to facilitate community dialogue surrounding addiction and the opioid crisis.
Stauffer has performed in NYC and regionally (see "Actor" tab for credits and production photos).

The video below was made by students in my Movement class at the University at Albany after a class activity. It chronicles an improvisational piece they created during class.  I have written an explanation of and impetus for the project. I believe it is a good example of my teaching philosophy embodied:

Our SUNY Albany campus was shaken to the core late one night in January, when a violent incident that was racially motivated occurred.  It involved SUNY Albany students and it sent shock waves through the UAlbany community.  When my students came to Movement class the following morning they were afraid, distraught, and feeling helpless.  Many no longer felt safe on their own campus. I immediately re-calibrated my lesson plans to account for the crisis.  We had been working on an introduction to Viewpoints, and I felt that by switching to an impromptu lesson on Augusto Boals, we might be able to mobilize quickly and help them find an outlet for the shock they were feeling.  I felt it was important to engage and meet them right where they were.  I knew if we found a way to harness their energy and link it to their class experience, it would be an opportunity for growth and empowerment.

I moved the class into a study of sculptured images which they created around the classroom. They depicted reactions they or their friends had in response to the incident.  I brought them into movement together by using 30 second increments for holding the pose before releasing it and transforming into a new one.  They took turns stepping outside of the sculpture to view it externally and name things they observed.  They also had the opportunity to "tap in" for another student to assume a new physical position, and describe what it felt like.

After 30 minutes of foundational work, I asked them what they wanted to do with it.  The idea of a "flash mob" experience was suggested, and the class was instantly interested.  So, together, we created a plan that we would roll out before the end of class that day: we would perform a structured movement improv in the campus center food court in the middle of the lunch hour, which was still within our class time that day.  They decided they would spread around the perimeter of the food court. One by one they would come to a central point to create a sculpture together. They assigned one person to begin, and decided they would cycle through different sculpture poses, embodying their reactions to the incident.

Because this was an impromptu activity dealing with a sensitive issue, I was aware that some students might not be comfortable participating. It was happening in real time, and I knew that some students might not feel ready for such a public process.  I let them know it was optional and that there would be no penalty for opting out. One student preferred to participate from the sidelines, and we decided that she and I could be in charge of community engagement.  As the improv was happening, we walked around the space inviting any students and faculty watching to step in to the sculpture to share a pose embodying their own reaction to the incident.

The experience generated positive energy among the students, and they felt a new sense of agency through applying a movement technique to a real-life event. They made the video below which shows clips of the event.